Symbolic analysis is a method for making interpretations based on symbols.

In figure there is an object to be monitored using a traffic light. That symbol is a signal to our eyes to activate an interpretation: to wait (red light), to be alert(yellow), or to go (green) ahead. In our brains there is a formal logic to handle interpretations from traffic lights. We suggest that our brains work like an automaton in traffic lights. Sometimes, when we are in a hurry, we are questiong from ourselves: can we now go, can we now go... A detection from a traffic light causes a condition to be checked in the logic. It gives us the answer: You should wait, you should wait... Now you can go. That kind of symbol (traffic light) gives us pragmatic value, because it makes our travel safe, but still we can flexibly go further to home, work, trip etc - even when the traffic is very heavy.

That was the main principle of symbolic analysis in a nutshell.

Symbolic Analysis written in Visual Prolog can be used in modeling typical formal systems, which meet requirements for atomisticity: formal languages, theorem provers, many mathematical packages, as well as simulation and optimization packages, where the type system has been written using Vip domains.

Obs. In PDC Prolog there are numerous examples of Prolog domains written for

Implementing a Symbol and Interpretation

Symbol is a reserved word in Visual Prolog, therefore we use the object SymbolicElement to model any Symbol.

Clause is the base for the Symbolic Language.

There is a PCMEF-implementation for the symbolic analysis architecture: 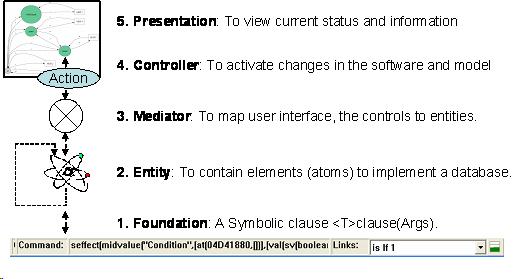 Summary for the Symbolic Analysis Framework for Visual Prolog

The SAM Framework creates a formal model for executing source code or any specific semantics expressed in Symbolic language as clauses. For each type of the element the domain symbolicType is defined. For each name type the domain is specified. These three definitions create a small mini computer to simulate any other computer as high abstraction.

The symbolic atomistic model is a conversion from a standard Prolog parse tree, where Prolog nodes in the tree have been replaced by links to the corresponding atoms, e.g. SymbolicElements.

Applications for the Framework

The framework can be used for simulating source code, for implementing a pie, theorem provers, troubleshooting tools, simulators, as well as many other typical Prolog implementions, where there is one holistic domain to cover the whole semantics of the system.

The first theories for symbolic execution has been developed for decades ago, and symbolic analysis has been used for various purposes like optimizing compilers or analyzing hardware or some specific software properties, but there have not been any solid theory to suggest, what symbolic analysis really could be. The work of this page comes from the dissertation of me (Laitila 2008): Symbolic Analysis and Atomistic Model as a Basis for a Program Comprehension Methodology.

Why to use Visual Prolog

A very effective property of Visual Prolog is its inference engine when used in evaluating branches of symbols, such as BDDs or any program paths. There is no need for the programmer to keep track on backtracking logic, or any fail-logic in cases when some symbol fails in simulation or traversing (a logic primitive of the corresponding symbol can cause either false or true depending on the logic: like a traffic light).