class_name/0-> and constant_name/0-> are built-in predicate that returns the name if the class/constant in which the call occurs. So the line above is equivalent to this:

exception::raise_definiteUser_explict is then used to raise the cannotCreate exception with the four pieces of extra information. The destinction between errors, user errors and definite user errors are described below.

It is very common to create helper predicates like fileSystem_api::raise_cannotCreate to do the actual raising rather that calling one of the predicates in exception directly from the code that needs to raise the exception. That way it is certain that the extra info for this particular exception is handled in the same way in all cases.

Normally, the helper raise predicate is created by the same programmer that declares the exception. And as mentioned above this is normally only programmers that create library software.

Application programmers will in most cases raise exceptions by calling appropriate raiser predicates, typically the some defined in exception.

As explained above it is very common that an exception is continued one or more times after it has been raised, so an exception contains a complete trace of entries (raise, continue, continue, ---). Subsequently, you will need to search the trace to see if a certain exception is among the entries. This is done by calling exception::tryGetDescriptor:

The exception trace corresponding to TraceId is searched for an exception of the kind Exception. If there is such an entry in the trace (raised or continued) the corresponding exception descriptor is returned in Descriptor.

A readable representation of the programPoint where the exception was raised/continued.

The exception in question

The entry kind (raise or continue)

The extra information provided with this entry in the trace

The time this exception trace entry was raised/continued

The thread id of the thread that raised/continued this entry

Is the description whose extra info we want to get something from.

The name of the extra info parameter we want to obtain.

The value that the mentioned parameter has.

A user exception is distinguished by having extra information in a field with name common_exception::userMessage_parameter. This extra info should be a message with relevance for an end user of the program. The message can reference other extra info parameters using the format %PARAM. The preferred way to raise user exceptions is by means of the predicate exception::raise_user. Likewise you can continue exceptions with a user message using exception::continue_user.

A definite user exception is distinguished by adding true as extra info for the parameter exception::definiteUserError_parameter. The preferred way to do this is by using the predicates: 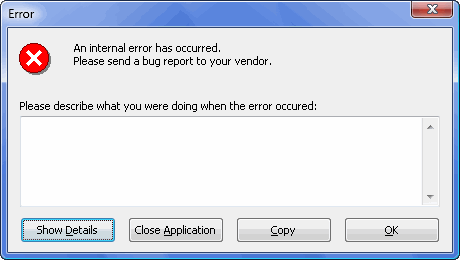 Example In the Visual Prolog IDE the reportErrorDelegate will send the exception information to a WEB service which will insert the notification in a database. The notifications in the database will then be used to improve the IDE.
Retrieved from "https://wiki.visual-prolog.com/index.php?title=Exception_Handling&oldid=2774"
Category: