When the form is filled, you press the button and you get the pzl-component, which may be now embedded to any pzl-container (executable application or the DLL).

The form to create the pzl-component is invoked via the menu item File/New.../Component. 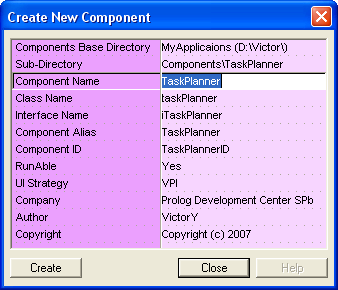 The operation is performed by clicking the button Create.

The button may be inactive if there is not enough data entered.

After the operation completion you may create any other pzl-component.

The button Close closes the form.

While the performing the operation the Message Window gets the report regarding the changes made in the project.

The newly created the Pzl-component may be embedded now to the pzl-container.

This is the name of the directory, which was set in the Basic Options. If you have no reasons to change the directories organization, then you may leave this property with no changes.

If you have changed the Components Base Directory compare to what was set in the basic options, then when the form will be closed you will get the question whether you wish to make changes in the Basic Options. 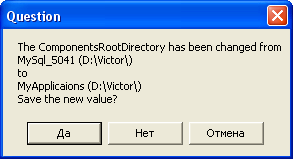 If you agree, then the new value will be used each time, when it participates in any operation.

The Component Sub-Directory is exactly the directory, where all files of the package of the pzl-component will be generated.

The Sub-Directory must be considered as the path (say Dir1/Dir2/Dir3 or just Dir1), which together with the base directory of the components gives the final path to the directory, where all files of the component will be placed.

The property Sub-Directory is mandatory. It may not be empty.

If the final directory does not exist, then it will be created with no announcement.

If it is impossible to create the final directory, then the error dialog appeared with the error message.

The name of the base interface of the pzl-component may not be the same as the name of the class. If this demand is not maintained, then the error message appears.

The name of the base interface may not be empty.

The name of the base class of the pzl-component may not be the same as the name of the interface. If this demand is not maintained, then the error message appears.

The name of the class may not be empty.

The component Alias may be any (not empty, no spaces) sequence of chars and serves to identify the type of the component like "TextEditor".

The component identifier may have one of the representations in the “New Component” form:

The second representation may be generated automatically by the pressing the button at the right side of the field.

The component property Runable defines the possibility to run the component independently.

It may have one of two values in the form: Yes and No. If “Yes” has been chosen, then the component will support the interface SpbRun

The appropriate clause will be created in the file <ComponentName >.pro. The User must define the real code for that clause:

The property UI Strategy defines the style of the user interface. It corresponds to the types predefined by Visual Prolog system. Here in the form the UI strategy must be chosen from the list:

The last three positions in the form