Adding the PzlPort to the application

The form to perform the operation may be invoked via menu Tools/Add/Port to Executable.

The operation is performed by clicking the button 'Add.

The button may be inactive if there is not enough data entered.

After the operation completion you may add pzl-system to any other application.

The button Close closes the form.

If the operation complete, then the report will be sent to the Message Window. You will see there also the report regarding the changes, which has been made on the project.

If Pzl-System was included to the application before, then the dialog message will appear and you may cancel the operation performing.

You may continue the performing the operation if you are making some updates like changing the license level.

The resulting report will be seen in the Message Window.

Coming back to the IDE, you may compile and build the project of the executable application.

The example of the project window in the IDE after the building the project may be seen below. 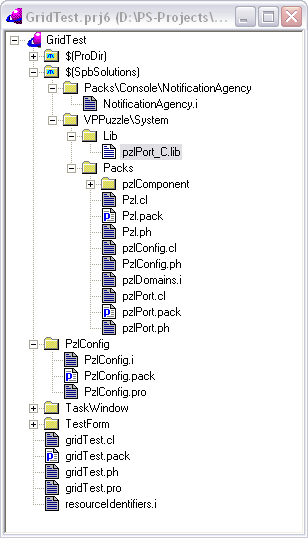 As the result of the execution of the operation by the Elementary PzlStudio the new part of the project tree appeared in the project together with the new files included.

The source code of the main applicaion’s file is also updated and the pzlPort initialization has been added (pzlPort::init())

Now you can add the assignment of the component registration file (if needed) using the IDE:

The target Project is the executable application project, which needs to be updated to add the pzl-system. The target project must be chosen as the Project file of the Visual Prolog programming system with the file extension .prj6.

So you must set the name of the Project file of the executable application.

When you open the form first, the field is empty and you may not edit the field. Pressing the button at the right side will invoke the file dialog to choose the application project file

The project must exist before you try to add the pzl-system to it.

If you create the completely new project from the scratch, then you must first create the project using the IDE, set there all needed options and then build it and save it (Ctrl-S).

If your project exists, then it is ready to include the pzl-system to that project.

There is no need to close the project in the IDE before you are going to add the pzl-system to it – it is enough to save it (Ctrl-S).

The Pzl-system uses the licensing principle.

There are license levels predefined:

The license level is defined:

The correspondence of the license level and the library’s identifier is shown below:

PzlStudio proposes the license level Commercial by default. This corresponds to the library PzlPort_C.lib.

When you choose the license level, then the Elemantary PzlStudio automatically assigns the name of the library to the property Container Library. This property is not editable. If the choice is Exclusive license level, then the dialog to choose the filename of the library appears and you see all available libraries. You must choose one of libraries of the Exclusive level. If the choice is wrong, then the error message appears

The Library of the Pzl-system

This field is not editable. It shows the name of the library pzlPort_X.lib, which corresponds to the appropriate license level of the main application.

The pzl-container version is the string value, which has the meaning for the developer only. The Elementary PzlStudio only places the value of the property as the value of the constant pzlContainerVersion_C in the file PzlConfig.i, when it will be created.

Attributes related to the basic options

The last three positions in the form