All features of the PZL mechanism are provided by the Pzl-system. Pzl-system contains some classes represented as source code and some classes represented as the statically linked libraries. It was used the feature of Visual Prolog that the source code of libraries can be written in Visual Prolog language. The picture below shows the content of the PzlSystem for the executable entiry (EXE). 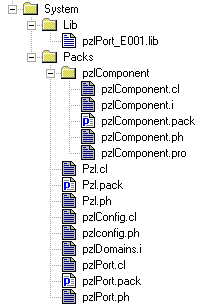 The PzlPort is responsible for the loading and unloading DLLs. When user calls the pzlComponent constructor, PzlPort finds the DLL, which contains the appropriate pzl-component. If the DLL is not already loaded, then it loads the DLL and communicates with the classes of the pzl-container.

The PzlPort uses the order as follows:

Because of the parts of the applications, based on the pzl-Technology, may be build in different time and with the different versions of the Visual Prolog, the incompatibility between the application and DLLs and between DLLs may happen. Tools placed to pzl-port and pzl-container libraries communicate and check this compatibility before the use of components have started.

If the incompatibility have descovered, then the DLL is unloaded and the exception is generated.

Also three levels of the licenses are used to avoid the unauthorized use of pzl-containers. These levels are:

The PzlPort can communicate with the pzl-containers, which have the same or the lower privilege.

The Exclusive license level is the private license and can be created for the given user personally.

The use of the pzl-containers with the Public and Commercial license levels is available also in that case.

PzlSystem performs some functionality, which are not directly concerns with the component technology.

One of these kinds of the functionality is the Active Object registration. Let’s come back to the major construction of the VIP:

Once created instance of the class will be destroyed if the pointer (reference) to the instance will not be stored. There are many situations, when one instance may be used by many other classes. Then it is needed to store the pointer to this instance in the place, which all components can easily reach.

When we have the application built using the usual style we may have the static class, which can store pointers to instances. When we use the technology based on the DLLs we need some data store, which all components can refer to. In the pzl-technology the special data store engine embedded to the pzlPort. Any component placed to any container can easily make the operation like

Any other object can get the object using the call

Class Pzl contains many other useful predicates to manipulate with the object registration.

All pzl-components active at the given moment use the same standard output stream.

The following features of the Visual Prolog programming system used:

The Pzl-technology has all advantages and disadvantages, which VIP programming has because of it don’t change much the VIP style of programming.

The pzl-technology sets some limitations:

The usual limitations of VIP DLLs must be taken in account: