To edit a dialog, in the project tree (in the Project window) double click (or press Enter) the name of a file with a dialog description (the .dlg filename extension). The IDE Designer appears and you can edit whatever form of a dialog you wish. 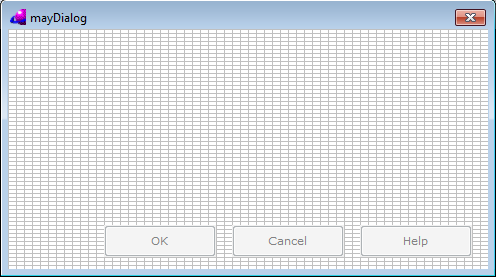 The IDE Designer After Creation of a New Dialog

When a new dialog is created, it will by default have three push button controls: OK, Cancel and Help. These can freely be rearranged or deleted.

Each control in a dialog must have an identifying name (constant in VPI style dialogs), which is unique within that dialog. While two controls within one dialog may not have the same name (or constant value), it is actually a good idea if controls in different dialogs, which perform the same action have the same names (or constants).

Originally the Controls toolbar is displayed below the IDE Designer window. You see it in the following picture:

Clicking icons in the Controls toolbar you select a type of a control to be placed into the edited dialog/window/form/IDE control (sometimes we will use the term container instead of dialog/window/form/IDE control). When you click a control type icon, then the current cursor is replaced with the cursor correspondent to the control type to be inserted. Move the cursor to some position in the container client area and click the mouse button. The control with the default size will be inserted at the specified position.

Instead of dropping a control into a container with a click, it is possible to drag out the rectangle (in the container client area) where a control should be placed; so you can specify not only the control position but also the control size.

After a VPI control is placed with the mouse into a VPI style container, the correspondent VPI control Attributes dialog appears. In this dialog you can change some control attributes, when you close the dialog, the control appears at the specified location in the container.

There are the following icons in the Controls toolbar:

Click inside a control to select one control. A frame appears around the selected control.

Also after one or more controls are already selected, you can include one extra control in the selection by holding down the Ctrl key and click the control.

To deselect the control or group of controls click outside the selecting frame. Deselected controls lose their frame.

Once a control has been inserted in the dialog, it has a default size. To re-size a control, first click inside the control area to select it. Then move the cursor to the sizing handles on the selection frame. A new shape of cursor indicates the direction in which you can re-size the control. Press and hold the mouse button, drag until the selected control has the size you want, then release the mouse button.

You can also change the size of a control by double-clicking it to activate the dialog for control attributes setting. Select the position you want to change and after specifying a new position or size, press enter to return to the dialog.

Remark: You cannot change the size of icons. You can only change their location.

To move a control or a group of controls first select them. Then move the cursor inside the selection frame, press and hold the mouse button, drag the mouse pointer to a new location and release the mouse. Also, when one or more controls are selected, it is possible to use the cursor keys to move the selection in small steps (corresponding to the Grid settings).

To arrange a group of controls first select the group. Then click an appropriate button in the Layout toolbar or a menu item in the Layout menu of the IDE menu (or in the pop-up menu).

The Layout commands for justifying and resizing controls:

Initially this Control Properties table is empty. However, as soon as one of controls in the edited dialog (form) is selected this table starts to display properties of the selected control.

To change attributes of a VPI package control double-click it or select the control and activates the Control Attributes command from the IDE Designer speed menu. Then the <ControlType> Attributes dialog appears.

These dialogs contains two levels of attributes. The general group contains attributes, which are common to all types of controls: the Text determines the control title, the Constant (name) is used as the control identifier, and the Control Size group determines position and size of the control.

Notice that in the Text fields the ampersand symbol & is reserved for indicating that the next to it character is to be underlined. For example, if you use the text string E&xit as a control name, then this control will be displayed with the title Exit at runtime. I.e. the char x will be displayed underlined (thus visually indicating that the x is an accelerator key). If you need to display the ampersand & symbol in the Text of a control, then use two of them &&.

Other attributes are individual to different kinds of controls.

In difference to them GUI controls have additional Anchor properties, which help to reposition (and may be resize) GUI controls when containing them GUI dialog (or form) is resized.

Each anchor determines that the specified (Left, Top, Right or Bottom) control boundary should be always positioned on the stated distance from the nearest (correspondent) border of the dialog (frame).

Each of anchors can have the True or False values. When the anchor value is True, then this anchor is active (used to position the correspondent control).

For example, when the Left Anchor is active (has the True value), then the left control boundary should be positioned on the stated distance from the nearest (left) border of the dialog (frame).

The simplest way to see which anchors are active for a control, is to select this control. Then some red arrows between control boundaries and correspondent boundaries of the dialog can bee seen. Each arrow specifies, that the correspondent anchor is active. For example, the arrow from the control top to the dialog top identifies, that the Top Anchor is active. In the picture below, you see three arrows, which specify that the Left, Top, and Right anchors are active to the Push Button control.

Numbers near such arrows show distances (in Dialog Base Units) between the correspondent boundaries of the control and the dialog.

You can Cut or Copy a group of selected controls onto the Windows clipboard, and Paste controls from the clipboard back into a dialog. The Undo and Redo commands serve to delete or restore the last editing operations of your dialog.

When the menu (or the pop-up menu) entry Resource | Grid is activated, or when the

button from the Layout toolbar is pressed, the following dialog appears:

The Dialog to Specify the Grid Properties

With a grid in place, arranging the controls inside a dialog is easier. Also it is possible to tell the IDE Designer by the Snap to Grid that it should place controls at the grid intersections to give a satisfactory result. 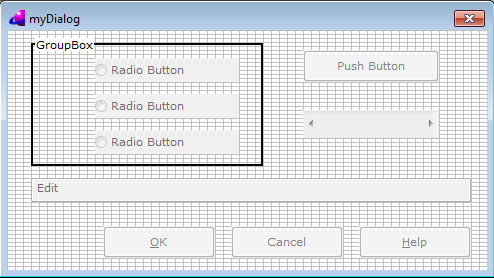 Using a grid in the Dialog/Window/Form Editor

The IDE Designer has the Test Mode, so it is possible to see how the dialog with the created controls behaves. To illustrate the Test Mode we will assign some default values to the controls. The test mode is activated and deactivated from the Resource menu (or from the pop-up menu). 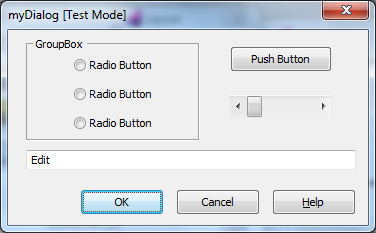 Test Mode for a Dialog

When activating the menu (or the pop-up menu) entry Resource | Tabstops, it is possible to specify to which controls you can Tab to in the dialog. When this command is activated a small button with the + or - appears on controls depending upon whether the control has a tab stop or not. By clicking the small buttons, it is possible to toggle the setting. 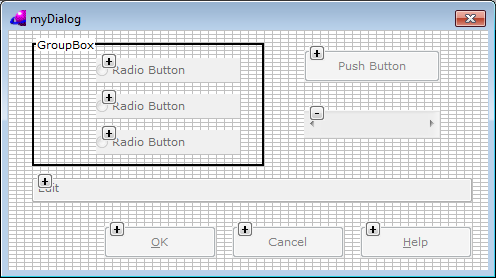 Specifying Tab Stops for a Dialog

To exit the tab stop mode, just click in the dialog but outside of any controls.

When the tab stops have been specified for a dialog, then it is possible to specify the order in which controls will receive focus when tabbing. 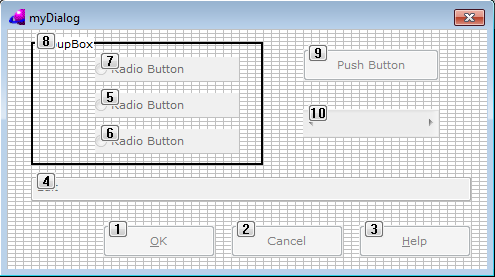 To change the visit order, click a small rectangle displaying the visit order number for a control that has an incorrect sequence number and this will bring up another dialog to change this sequence:

To stop the visit order mode, just click in the dialog outside any controls.

When you are in the IDE Designer you can click the right mouse button to activate the Speed Menu. From this menu you can easily call any IDE Designer command: 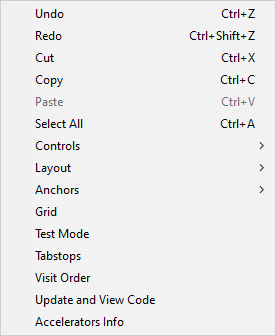