Difference between revisions of "Ide/Project Settings"

The Project Settings utility is used to create new Visual Prolog Projects and to change some settings of existing projects.

When creating a new project the sheet looks like: 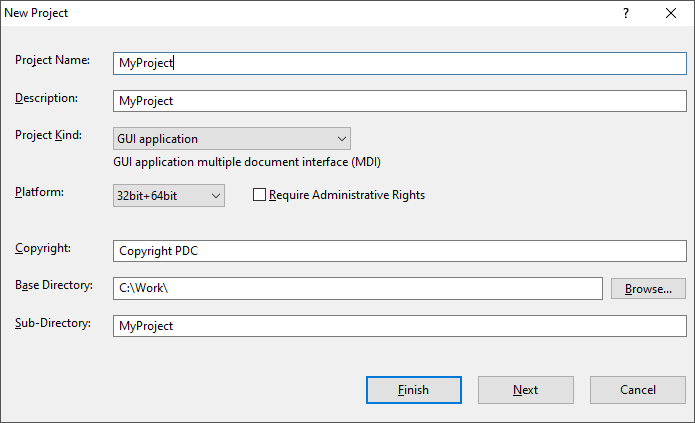 You need to specify a mandatory project name and other options. After the needed information is specified, press the OK button. The Project Settings utility will create the default files, define the build script, etc.

Sets which type the application will have.

The IDE automatically generates different default sets of files (and codes) for each application type.

Note. DLL option is available for the Visual Prolog Commercial Edition only.

Note. This option is available for the Visual Prolog Commercial Edition only. Otherwise the MDI Mode is assumed by the default.

Base Directory and Subdirectory

The name of the directory, in which the project is placed, is generated from the path specified in Base Directory that is concatenated with the folder name specified in Subdirectory.

Note. That if you choose a directory that already contains some project as the directory in which to place the project being created, then the Project Settings utility displays the These files will be overwritten warning dialog. It displays names of already existing files which will be overwritten after you push the Create button. Therefore, it is a good idea to store each project in its own directory.

Specifies the project target platform as one of the following:

When the two 32bit 64bit platforms are specified as the project target, the active platform can be choosen through the Build menu.

Note. This option is available for the Visual Prolog Commercial Edition only. Otherwise the 32bit is assumed by the default.

When it is checked ON, then the Manifest file is generated for the project.

A Win32 side-by-side assembly contains a collection of resources—a group of DLLs, windows classes, COM servers, type libraries, or interfaces—that are always provided together with applications. These are described in the assembly Manifest files. For more details about Manifest files see descriptions in MSDN.

Specifies that the generated manifest file contains a statement to require the system commctrl.dll version 6 for the application.

Specifies that the generated manifest file contains a statement to require the administrative privileges for the application.

The General tab will look, in this case, as foolows:

Directory names refer to the build script symbols. For example, when giving the name $(ProDir), it is automatically expanded to the actual path where the Visual Prolog system is installed.

When all these project subdirectories are defined, then it is possible to move a project to another place and still be able to use it without need to redefine the project build scripts manually. This is possible because:

$(ObjDir) - This directory is used to place all intermediate (temporary) files of the project generated by the IDE. It defines the $(ObjDir) build script symbols. The IDE automatically adds suffix 64 to the intermediate directory name.

$(ExeDir) - This directory is the place for the generated target module (executable or DLL). It defines the $(ExeDir) build script symbols. The IDE automatically adds suffix 64 to the final directory name.

$(LibDir) - This directory is used for DLL projects to place the generated import library. It defines the $(LibDir) build script symbols.

$(ProDir) - It is the root directory of the used Visual Prolog version. This directory defines the $(ProDir) build script symbols.

You can add a new directory to the list of the project include directories using the Browse button. The Browse button activates the Set New Directory dialog. Also you can use the Edit button, which activates the Edit Include Directory dialog. In this dialog you can directly type in a path. Using Up and Down buttons you can change the order in which the compiler will search in the specified include directories.

Here you can edit the project build script Rules and the project Build Script, specify the Type Library File, etc.

Determine how to compile files with given extensions. An example is the following:

For more information about Rules syntax see the Make Facility.

Describes how to build the final target. An example is the following,

Ordinary module-definition files should be used when the project target is a DLL or when the target file should use DLLs.

When the project target is a DLL, then names of all predicates exported from the DLL have to be added to the EXPORT section of the module-definition file, which is used to build the DLL.

When an import library is included into the project modules, then the correspondent DLL is linked statically to the application (load-time linking). Such projects must have module-definition files, whose IMPORTS sections should specify names of all predicates imported from the DLL.

Here you can use the Browse button to specify a Type Library, which should be used in your project. Usually, you need this when creating COM objects.

Some of version information attributes can be shown by the operation system File Properties dialog and can be used to validate version of DLL or EXE, before loading them.