Difference between revisions of "Ide/Debugger"

Visual Prolog Debugger is the IDE tool, which can be run with the Debug | Run menu command, with the F5 hot key, or with the

When you start Visual Prolog Debugger (with the Debug | Run menu command, or with the F5 hot key, or with the

toolbar button), then the IDE builds (if it is needed) the project, runs the target executable under the debugger, and breaks the program execution at the entry point of the goal section:

If in the Run Arguments edit control (in the Build Options tab of the Project Settings dialog) you have specified a string with command line arguments, then this string is passed to the program.

The Debug menu is used to control execution of the program being debugged. 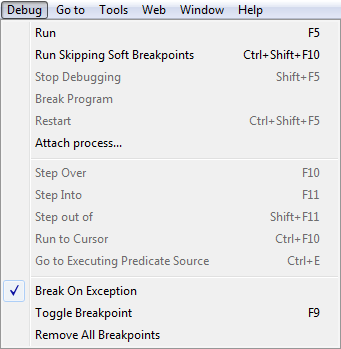 How to Use Break on Exception

Some times, it is difficult to locate which your source code predicate generates an exception. In such situation the Break on Exception option can be helpful.

When an exception occurs, Debugger catches it and execution of a debugged program is stopped.

Several debugger windows can be opened from the View menu:

The windows, which can be used in the debugger (debugger views), are:

Also the following two windows, which are not only debugger windows (debugger views), can also be used while debugging:

When the debugger is started, you can click the View | Project Window to display the Project Files Tree (the Project window) and the structure of the project files can be examined by exploring the project tree. 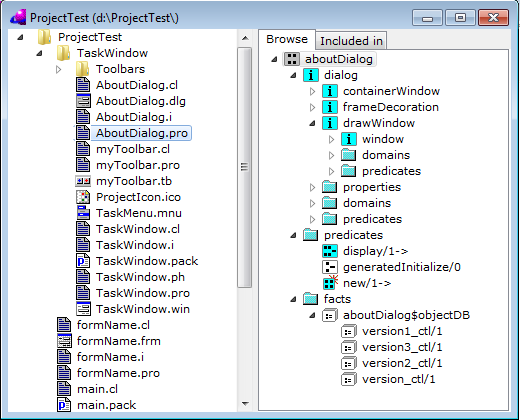 In this view, it is possible to double-click files (the project consists of) and double-click individual predicates. The result will be that a source code editor opens up with the caret pointing to the clicked item.

When the IDE starts debugging a project, it automatically runs the target executable under the debugger, and breaks the program execution at the goal section entry point. The debugger opens the correspondent (containing the goal section) Visual Prolog source file in the IDE text editor. 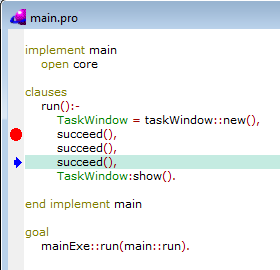 pointing to the executing predicate:

The debugger changes the color of the Instruction Pointer arrow when it executes a predicate, which fails or which raises an exception.

The Run Stack consists of three kinds of items:

The BackTrack (marked with

) and TrapTrack items (marked with

) are backtracking points. The clause, marked by one of these items, will be resumed and the program execution will be continued after the corresponding failure or an error occurs.

The typical example of the Run Stack window is presented in the following picture:

The Run Stack window has the pop-up context menu:

For each selected item in the tree, this menu contains items:

The Run Stack window can be activated by the IDE menu View | Run Stack.

The Variables window can be activated either by Ctrl+Alt+V or from the IDE menu View | Variables for Current Clause.

The Variables window displays the tree of all program variables and facts from the traced clause, which are already created by the program at the current tracing step. These are: all variables and all object facts (fact variables), which are created in the clause before the executing instruction, and all class facts (fact variables), which can be used in this clause (declared in this class implementation).

The top line of the window displays the declaration of the predicate, whose clause is executed. 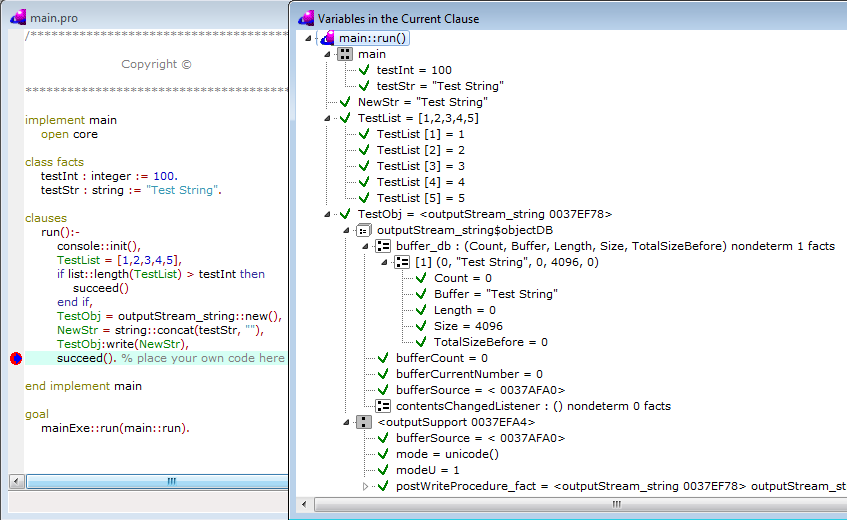 The Variables window content is updated after every trace step.

The Variables in the Current Clause window has the following pop-up context menu: 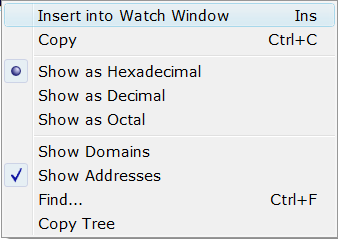 The Facts window always shows the current contents of all class fact databases defined in the program being debugged. 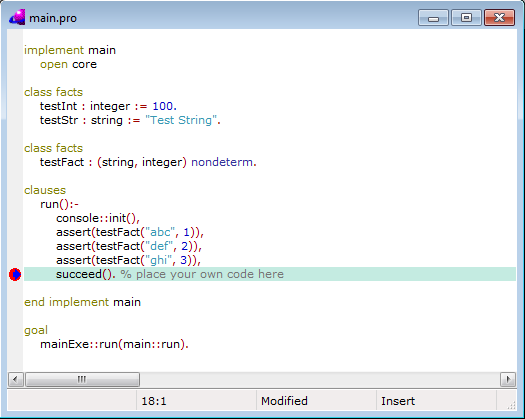 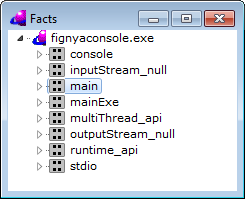 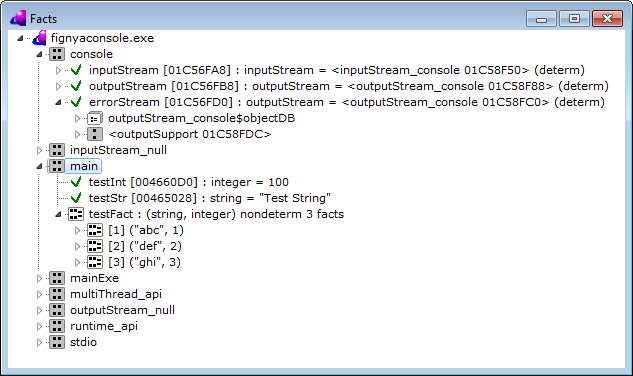 Facts window automatically goes to the fact that is selected in the text editor (if any): 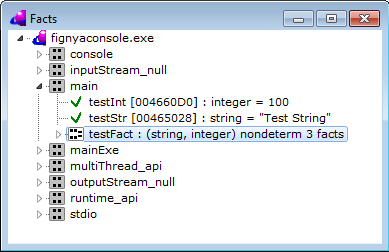 The Facts Window has the following pop-up context menu:

The Breakpoints window shows all breakpoints, which have been set in the program being debugged.

You can set a breakpoint onto any executable line in program source files (or in the Disassembly window, where a breakpoint can be set on any instruction of the program being debugged).

The Breakpoints window for each breakpoint includes Status, Source, Line, Count, Comment and Action, where:

Breakpoints in Prolog and Disassembly Windows

Breakpoints can be set in Prolog source files and in the Disassembly window:

All breakpoints which are set in a program are seen in the Breakpoints window.

Each breakpoint has properties, which can be modified in the Breakpoint Properties dialog: 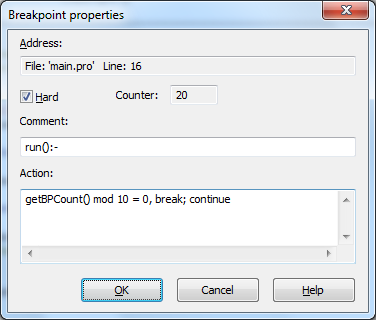 Shows the current number of activations of the breakpoint since its creation. The user cannot modify this value. This value increases by 1 each time when the program reaches the breakpoint. And resets to 0 at the beginning of the debug session.

In this edit box you can type in a Comment string. By default it has the value of the corresponding line in the source file.

In this box you can type in a Script text.

The Breakpoints window has the pop-up context menu: 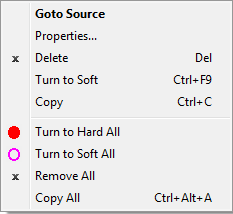 To activate this menu, select a breakpoint and press the right mouse button. This menu contains items:

The Breakpoints window is auto-updated for any breakpoint updating.

The Breakpoints window can be activated either by Ctrl+Alt+B or from the IDE menu View | Breakpoints.

The Threads window shows information about the process being debugged and its threads.

Names displayed in the header of the window columns are the following:

The Threads window has the pop-up context menu. The same commands can be activated from the Thread sub-menu of the IDE task menu. 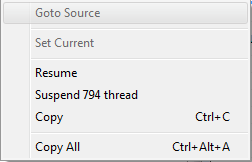 The Threads window is updated after changing any displayed parameter.

The Threads window can be activated either by CTRL+Alt+H or from the IDE menu View | Threads.

The Disassembly window shows the assembly language interpretation of the inspected code.

The disassembly starts from the specified top address toward the upper memory and prints each instruction on a new line.

Each line is printed by the pattern:

Are the instruction pointer

) markers, which can mark this line.

The start address of the instruction code.

This is the hexadecimal instruction code. This field can be shown/hidden from the pop-up menu of the Disassembly window by checking the Show OpCodes item.

Instruction pointer in the LineMarkers field.

The Disassembly window has the pop-up context menu with the followin commands:

The Disassembly window is updated after each trace step of the debugger.

If the tracing code has no debug information, then the Disassembly window is opened initially (when the debugger starts) and the instruction pointer

points to the executing assembler instruction.

A register value is printed:

The Floating Point command from context pop-up menu can be used to turn ON/OFF the displaying of Floating-point registers.

The Registers window can be activated either by Ctr+ Alt+G or from the IDE menu View | Registers.

The Modules Window shows all the modules currently loaded in this debug session. It shows the filename, path, the base address range, the code address range and the type of debug information.

The Memory Dump window shows the virtual memory dump of the program being debugged. Memory dump lines have the length, which is determined by the window width. The number of printed lines window height.

Each line in the Memory Dump window is printed by the pattern:

This is the hexadecimal address of the first byte of the memory displayed in this line.

This is the hexadecimal format of the memory dump. Each hex value can be an image of one, two, four or eight continued memory bytes (this is contolled by the Memory Dump window content pop-up menu).

This is the same memory dump but in the format of ASCII characters (a character represenrs one byte). Unprintable characters are printed as dots.

This is the same memory dump in the format of Unicode characters (a character represents two bytes). Unprintable characters are printed as dots.

The Memory Dump window title shows the module name, which memory is displayed in the window. If the module name cannot be determined, then the title displays Unknown module.

If memory is inaccessible then its state will be represented by following symbol:

The Memory Dump window has the pop-up context menu which contains commands:

The Memory Dump window can be activated either by CTRL+Alt+M or from the IDE menu View | Memory Dump.