How to Import an Existing COM Component

The Component Object Model (COM) is a way for software components to communicate with each other. It is a binary standard that allows any two components to communicate regardless of what machine they are running on (as long as the machines are connected), what operating systems the machines are running (as long as they support COM), and what language the components are written in. COM provides location transparency: it does not matter whether components are in DLLs or in EXEs. COM components are binary units of code that include packaging and registration code and that create COM objects. Each COM component, in the COM programming model, is a programming structure encapsulating both data and functionality. It is defined and allocated as a single unit and the only public access to the COM data and functionality is through the programming interfaces.

How to Create a New COM Package

To create a COM package providing the interface (wrapper) to some COM component, you should activate the File | New IDE command. Then in the left pane of the opened Create Project Item dialog you should select COM Package. Then the dialog accepts the following shape: 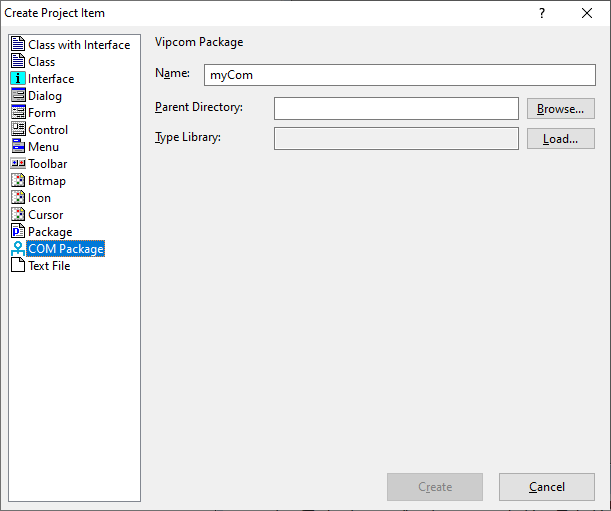 In the Name edit control you should type in the name (XML on the picture) of the COM package (wrapping package) being created.

Controls in this group box are used to specify a COM module (DLL or EXE) from which a component should be imported. It contains the following controls: